This week, we have a Special Edition of LWKD. Instead of the usual list of changes, we will be covering two project areas: changes to project structure announced by the steering committee, and the list of proposed features for the 1.10 release.

We have had requests for both an RSS feed and email distribution. If anyone is available to help with either, let me know.

This week’s demo showed off kubegen, which builds object definitions by asking the user questions. Aside from the 1.10 release and Steering Committee (SC) updates, we had reports from SIGs Cluster Ops, Autoscaling, Architecture, Testing, and Docs. Cluster Ops announced that they were changing SIG meetings to more of a “meetup” format, focused on sharing experiences in operations. Contributors with demos of operations tools or techniques are invited to deliver them to the SIG; contact Rob Hirschfeld. Autoscaling would like more feedback from users about how Horizontal Pod Autoscaling (HPA) is working for them, and has begun work on Vertical Pod Autoscaling (VPA). Architecture mentioned that they were in the process of replacing the word “master” in the documentation, as its use is offensive to some groups, and not accurate.

SIG Testing announced the “Testing Commons” meetings bi-weekly at 7:30am Pacific on Wednesdays. These meetings are to allow contributors to other SIGs to get peer-to-peer help on developing and maintaining tests, especially if those tests will be going into the common test repo. SIG Doc showed off a beta of the new “user story driven” documentation; please give them your feedback on this change.

Contributors should “save the date” for a contributor summit, before KubeCon.EU, on May 1st.

The Steering Committee (SC) met last week and decided on the new structure for formalizing sub-projects and experimental projects. First, they’re proposing adding “subprojects”, which would be small teams focused on specific repositories, directories, or APIs. Like SIGs, these subprojects should have OWNERs files, be listed in sigs.yaml, and support release automation. SIG Leads should review this proposal.

Previously, Kubernetes had an “incubator” for new projects. However, there was no clear criteria for projects to “graduate” from the Incubator, or be terminated. So the SC is creating a new namespace for unreleased code, kubernetes-sigs. In this new namespace, each SIG can create repositories for experimental code that may someday be merged into core, become a plugin, or be dropped. This way, new projects have a path to stability via the SIG. The Incubator will eventually be dropped.

Feature freeze was January 29th, so we now have a complete list of proposed features for 1.10. Caleb Miles also pushed an alpha release, which users can try out via Kubeadm installation. Among the 35 tracked features for 1.10 are the following:

Others moving to Beta:

Others moving to GA:

Note that while these are planned features, inevitably some of them will be postponed or modified before 1.10 release. 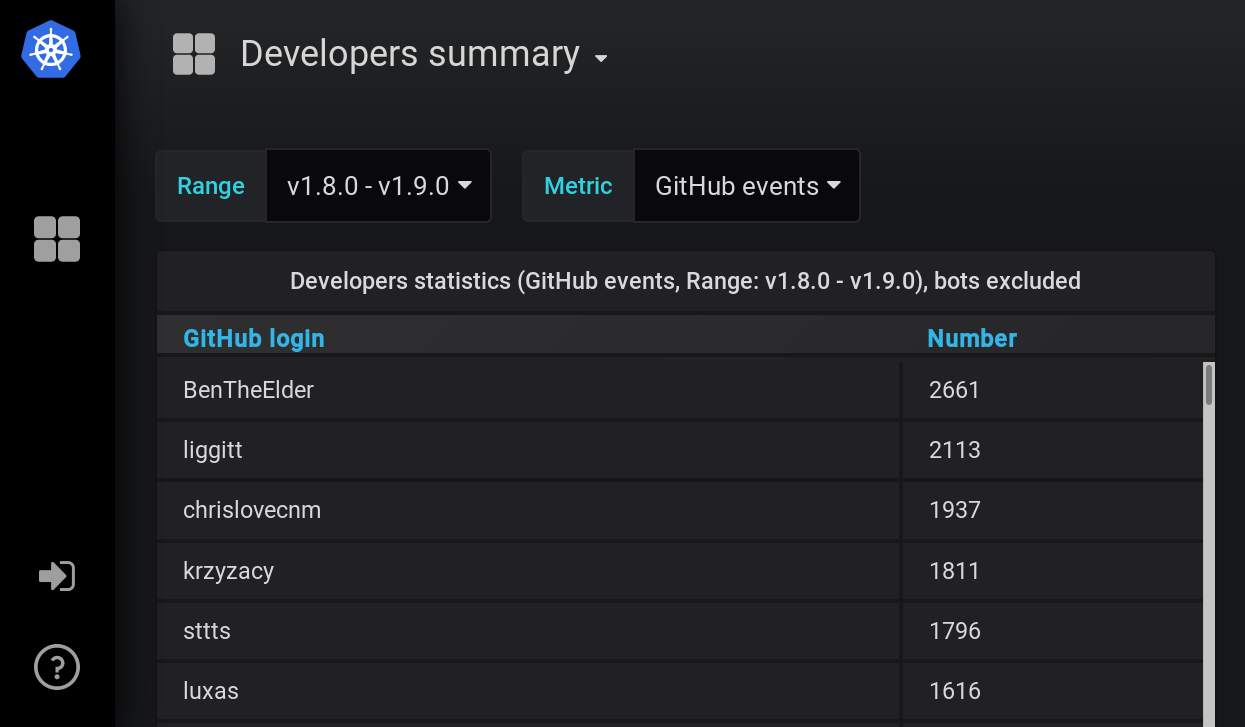 The graph of the week supplied by Aaron Crickenberger is a table: developer summary. While summarizing all of someone’s contributions as a single metric isn’t a great thing, it’s useful for contributors to see how they’re doing relative to prior releases. This is a table of Github “events”, such as issues, PRs, reviews, bugs, comments, etc. Notably, Jordan Liggit consistently shows up as one of the top contributor for the last few releases because of the many PR reviews he does. Thank you, Jordan!