Chuck Ha kicked off the Community Meeting with a demo of Sonobuoy, a tool for running Kubernetes’ recently broadened conformance tests. Heptio staff wrote Sonobuoy to make it easier to run the tests, so that contributors will run them more often and prevent unexpected API breakage.

SIG Storage has released a number of alpha features in the last few releases, including Container Storage Interface (CSI), local storage support, mount propagation, and volume protection. They will be working on getting those to GA over the next few releases, also on topology-aware storage for 1.11. Multicluster had less encouraging news; first, Saad Ali said that they would not be fixing existing bugs in Federation V1 as work moves to Federation V2. The latter is in its own WG, which is currently in the “brainstorming” phase and plans to have a federation API which is different from the standard single-cluster API. They are also working on Cluster Registry for multi-cluster metadata, and Kubemci, a CLI for Ingress in multiple clusters.

Announcements: Phil Wittrock said that the project will stop distinguishing between Maintainers and Owners. Meet Our Contributors is Wednesday, contributor participants wanted. And Kubecon.EU registration prices go up March 9.

We are now in week 9 of 12 for 1.10 and in Code Freeze. During Freeze, only merges for the upcoming release are accepted so that SIGs will focus entirely on stability, bug-fixing, and technical debt. Contributors should have already submitted PRs for docs last Friday, and all users should test out the betas. We are also collecting known issues.

Since we are not in Code Freeze, feature commits all target 1.10. 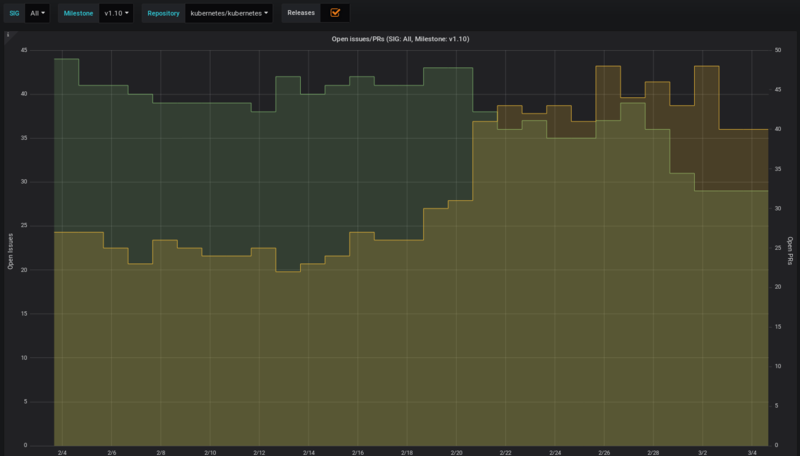 Josh Berkus worked with Lukasz of the CNCF to add a chart in order to compare workloads across releases. This shows the number of open issues and PRs by day for a user-selected period, allowing us to compare v1.10 with v1.9 and v1.8 at Code Freeze. While the counts are slightly high due to a Github data problem, this does show that v1.10 is in good shape compared with prior releases. However, part of that is because of fewer commits overall to 1.10, so that’s not entirely a good thing.