Last week’s Community Meeting started with a demo of CRI-O supporting Kubernetes 1.10 by Antonio Murdaca. He showed off the alternate runtime, and then discussed whether SIG-Node would move to it as the default (answer: depends on test coverage).

Steve Wong introduced SIG-VMWare, a new SIG working on Kubernetes compatibility with VMware & VSphere. They had there first meeting and published their charter last month. SIG-Windows, explained by Michael Michael, has been busy since 1.9 improving support for Windows containers, including resources, file system stats, Flexv, isolation, and e2e testing. They hope for a stable release to coincide with Windows Server 2019. Former SIG On-Prem has announced that they are demoting themselves from a SIG to a Workgroup/discussion forum.

Test-Infra is disabling the cherrypick-auto-approve munger bot, because nobody ever understood how it worked. Brian Grant, on behalf of the Steering Committee, said they were working on charters, with 6 in process, and explaining sub-projects to SIGs. Finally, Dan Kohn demoed the new CNCF interactive landscape.

Next Deadline: Feature Freeze, May 24th.

This was week 2 of 12 for 1.11. SIGs need to add their features to the features repo and the feature tracking spreadsheet. The release team also discussed a plan for shortening Code Freeze if all tests are passing by May 18th.

There were 156 merges to the main repository this week. 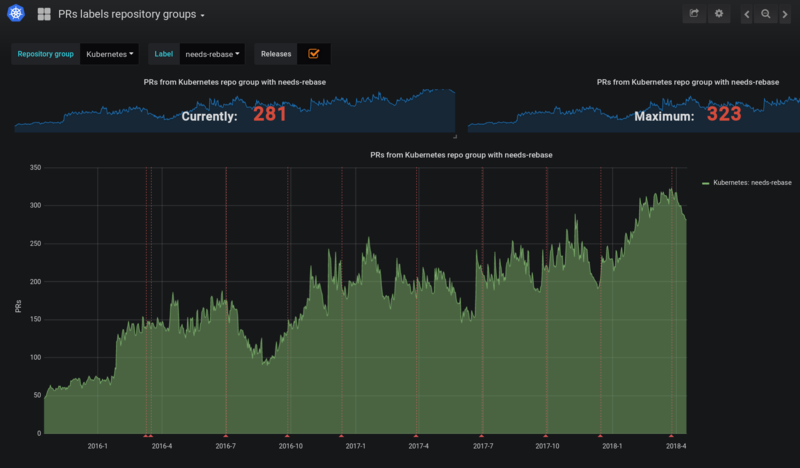 Aaron Crickenberger showed off the new PRs by Labels chart. This chart checks numbers of pull requests stuck because of needing submitter or owner actions, such as “needs-rebase” or “needs-OK-to-test”.