The community meeting demo this week was for Pulumi, a library/tool in Python, Java, and Javascript for deploying Kubernetes infrastructure. It integrates with Helm and stores data as Kubernetes YAML.

Richard Theis presented for the new SIG IBM Cloud. To date, they’ve been busy spinning up the SIG, but now they’re starting to work on moving IBM cloud code out of IBM and onto Kubernetes Github. The IBM Cloud will use the Cloud Provider API.

The Contributor Cheatsheet has a great list of resources for contributors. THere will also be an office hours this week.

Kubecon Seattle is sold out, so if you don’t have your pass already, oops.

We are already in Code Freeze, so at this point the only PRs which should be approved are critical fixes for bugs and failing tests. Master will reopen on Nov. 28th. Release Themes for the release notes are also due November 21st.

Recruiting for the 1.14 release team has begun, so if you wanted to try out being a Release Shadow, now’s your chance.

CSI is now 1.0! Kubernetes 1.13 will contain the official GA release of the CSI API for storage. After this, look to see all storage pushed out of tree to use CSI. Also, please note that there may be some backwards-incompatibilities with beta versions of CSI; at the least, update your driver version.

This lets users customize where their Kubernetes images come from on install, particularly to support Chinese users who can’t access GCR.

Contributor Tip of the Week 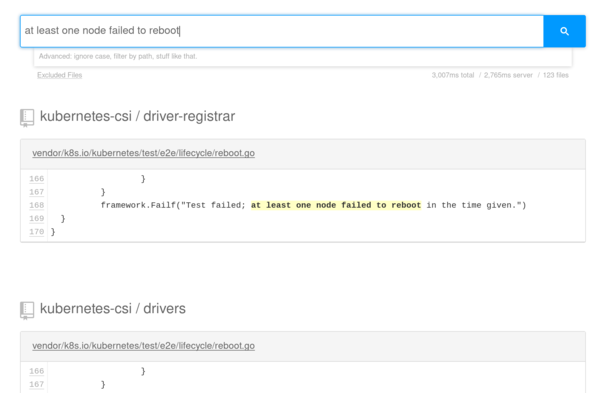 The cs.k8s.io tool allows you to search all the code across multiple repositories using a regular expression.